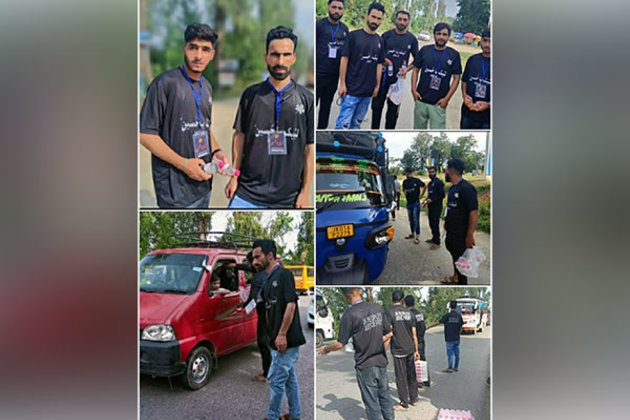 Baramulla (Jammu and Kashmir) [India], August 6 (ANI): Jammu and Kashmir People's Justice Front held a camp at Singhpora Pattan area on the Srinagar-Baramulla national highway where hundreds of people were served drinking water in commemoration of Imam Hussain AS who sacrificed his life for the nation in Karbala area in Iraq.

Muharram is the first month of the Islamic calendar. It is one of the four sacred months of the year when warfare is forbidden. It is held to be the second holiest month after Ramadan. The tenth day of Muharram is known as Ashura.

This time, the month of Muharram will be observed in 2022, corresponding to the month of independence and other festivals.

"Importantly, on August 5, the day when the state of Jammu and Kashmir was also made free from the clutches of Article 35A and 370; people irrespective of their religion and ethnicity were served drinking water indicating unity and peace in the valley of Kashmir", said a statement by J-K Peoples Justice Front.

It said, "Shia community in Kashmir valley is freely and openly observing their holy month of Muharram, which is an unusual happening in our neighbouring countries". J-K Peoples Justice Front strives for peace and harmony in the Kashmir valley.

Departing from the relatively muted response to the August 5 anniversary of the revocation of the special status of Jammu and Kashmir over the last two years, several Union Ministers took to Twitter to mark the third year of the event on Friday.

On Friday, Commerce Minister Piyush Goyal shared a 1.50-minute video clip that included an interview of Bhavna Thakar, a BJP member from Gujarat, where she reminisces a song by Prime Minister Narendra Modi in the 1990s to keep them motivated in their fight against Article 370.

"The official Twitter handle of Kashmir Police also joined the bandwagon by posting a message on "Security Scenario in Kashmir: Pre/Post Abrogation of Art-370," it read.

Lieutenant Governor Manoj Sinha on Friday -- the anniversary of the abrogation of Article 370 -- celebrated as 'Bhrashtachar Mukti Diwas' (corruption-free day). Sinha made the announcement at an event where he launched major initiatives for the prosperity of the tribal community. (ANI)