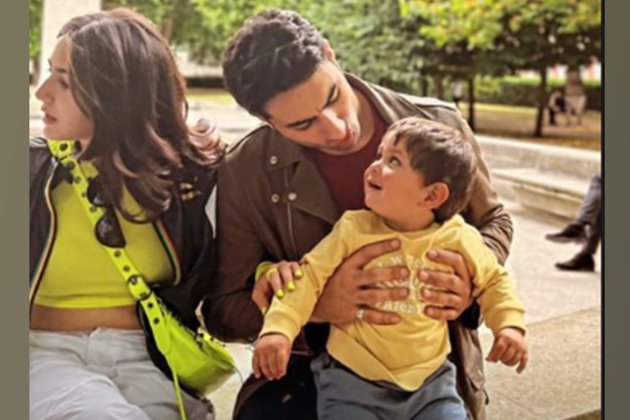 In the picture, Sara, Ibrahim and Jeh could be seen spending quality time in a park named Grosvenor Square in London, England. Sara donned a neon-green coloured crop top with white trousers and wore a black tinted jacket. She carried a neon green sling bag as well and kept her hair loose looking pretty.

Ibrahim on the other hand held baby Jeh on his lap and made cute faces with him that brought a smile to infant Jeh's face. While Ibrahim wore a brown leather jacket and a red, round-collared T-shirt, Kareena Kapoor's son, Jeh sported a yellow-hued full-sleeved T-shirt, looking at his brother Ibrahim with his innocent eyes, seemingly giggling.

'Kedarnath' actor, Sara who loves to travel and share scenic destinations with her fans on social media also posted a string of images on Instagram, enjoying the "summer vibe with her tribe".

The pictures gave a glimpse of Sara and her brother Ibrahim, enjoying themselves on the streets of England.

In the first image, both the siblings struck a dapper pose as they faced the camera. While Sara had put on a neon-green-coloured jacket with a graphic black top underneath and matched it with ripped jeans, her brother Ibrahim kept his look casual, wearing a bright blue sweatshirt with the word 'Strangers' written on it diagonally in red.

Sara glowed in the pink-hue in the second picture, looking quite chic, wearing reflective sunglasses.

In the third image, Saif Ali Khan's daughter leaned onto a tree as she looked sideways giving off the perfect sun-kissed look.

Meanwhile, on the film front, Sara was last seen in the film 'Atrangi Re' opposite Akshay Kumar and Dhanush. She has a couple of movies in her kitty. Sara will be seen sharing screen space with Vikrant Massey in 'Gaslight'. The film is being directed by Pawan Kriplani who earlier helmed 'Bhoot Police' and is bankrolled by Ramesh Taurani. She has also recently finished shooting for an untitled project alongside Vicky Kaushal. (ANI)